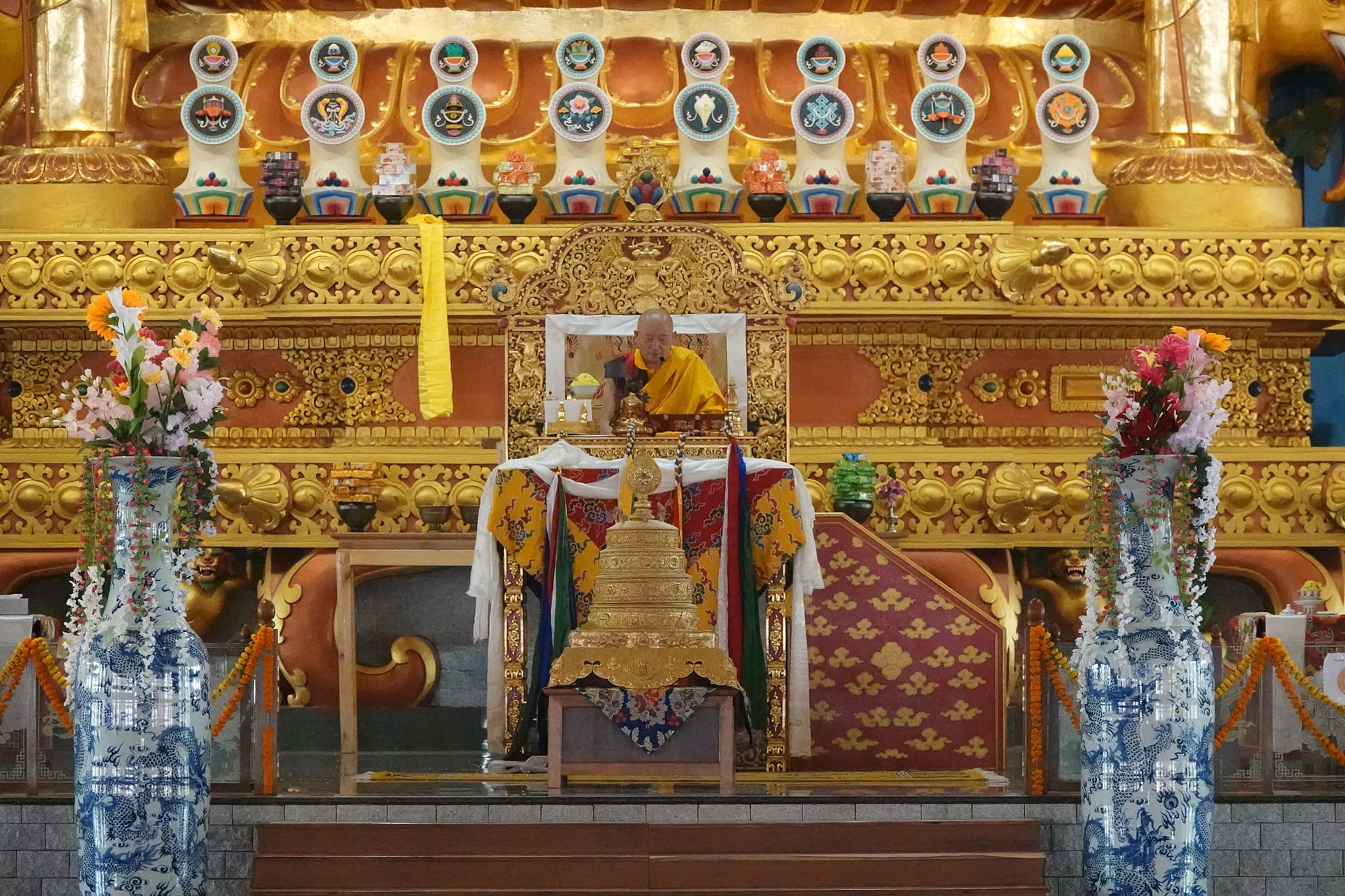 The dharma we are discussing is the Collected Works of Gampopa. When the Bhagavan Buddha was at Vulture Peak Mountain in Rajagriha, the author of these works, Gampopa, was the householder Young Candraprabha. At his request, the Buddha taught the King of Samadhis Sutra on the summit of Vulture Peak Mountain. While teaching it, the Buddha prophesied that in the future when the teachings of the Buddha were degenerating, Candraprabha would become the Bhikshu Physician and uphold and propagate the King of Samadhis Sutra. Among the innumerable bodhisattvas there at the time, there were five hundred who promised, supplicated, and made an aspiration to be Bhikshu Physician’s companions. The Bhagavan blessed them and said, “At that time, you will accompany and aid him.”

Gampopa had five hundred students who were mahasiddhas, including Karmapa Dusum Khyenpa, Drogön Pakmodrupa, Saltong Shogom, and Barom Darma Wangchuk, and could perform miracles. There were sixteen thousand other students who developed meditation in their beings and to whom he taught the meaning of the King of Samadhis Sutra, Mahamudra. There was absolutely no difference between the Buddha’s teaching and Gampopa’s. Moreover, in the last five-hundred-year period of the Buddha’s teachings, not all students have the same capacities. They have different intentions and different afflictions to abandon, so Gampopa taught in accord with each student’s continuum. Even though in terms of the meaning his teachings are not different in any way from the Bhagavan Buddha’s teachings, the way he expressed them in words was more beneficial, and his activity spread widely.

These texts of the Collected Works of Gampopa have been passed down in an interrupted transmission from the time of Gampopa himself by students such as Je Gompa Tsultrim Nyingpo and others, and the transmission has been preserved uninterrupted to modern times. I received this entire transmission from the Sixteenth Karmapa Rangjung Rigpe Dorje. He gave this transmission early on in the time at Rumtek. “Transmission” means that after the Buddha gave these teachings, they were present in the mind streams of the great bodhisattvas and arhats. It was then passed down until Gampopa’s mind stream. Gampopa gave these teachings, and then the continuum of his blessings, activity, and power entered his students’ mind streams through their ears. When they then taught them, the power of the activity accompanied the words.

When I received this transmission, the words of Karmapa Rigpe Dorje came through my ears and the continuum of that sound is in my mind. Though it is not a sound heard with my ears, it appears in the image of sound. When it appears in the image of a universal sound, then as we say when teaching epistemology, the word universal and the entity universal arise, and the imprints form and remain in the mind. Along with them are the blessings of the Buddha, the blessings of Gampopa, and the bodhichitta, blessings, and power of the activity of Karmapa Rigpe Dorje. Because of that power, it is also a cause of achieving buddhahood and is included in the undefiled paths.