On the morning of 26 December 2022, His Eminence Goshir Gyaltsab Rinpoche arrived at Bokar Shedra Öbar Chime Ling to bestow the oral transmission (lung) of the Collected Works of Gampopa.

Although the Kagyu Gunchoe debates had already been underway for four days, all the monks were anticipating the arrival of this most distinguished guest.  From early morning, more than 1300 monks from 11 Kagyu Monastic Colleges formed a line on both sides of the long path leading through the gardens to the imposing temple – and waited calmly for Rinpoche's arrival.

In a display of deep respect, Gyaltsab Rinpoche was accorded a grand, golden procession.  Accompanied by Kyabje Bokar Rinpoche Yangsi and Khenchen Donyo Rinpoche, a line of monks, wearing full dharma robes and the traditional red Kagyu hat walked down the path to receive the precious guest and escorted him under the golden parasol back to the main shrine hall.  At the head of the procession were incense bearers and monks carrying colourful auspicious banners; behind them came the musicians playing gyalings, cymbals and drums.  Gyaltsab Rinpoche and his entourage were welcomed warmly by Bokar Rinpoche Yangsi and Khenchen Donyo Rinpoche, who then escorted Rinpoche through the monastery grounds to his quarters above the main shrine hall.

Shortly after his arrival, everyone was seated in the grand shrine hall awaiting the start of the oral transmission of the Collected Works of Gampopa, the great founder of the Dakpo Kagyu lineage.

His Eminence Gyaltsab Rinpoche sat on the central throne below an immense golden Buddha; Kyabje Bokar Rinpoche Yangsi's throne was to the left, and Khenchen Donyo Rinpoche's throne was to the right.  The other rinpoches, tulkus and khenpos were also seated on the stage, which had been adorned with garlands of marigolds along its edges.  Tea and sweet rice were offered to everyone present, and the mandala offering to request the teachings was made; then, as an introduction to the transmission, Gyaltsab Rinpoche gave an inspiring speech.

The body of Gampopa's texts is extensive and requires days of continuous reading — Rinpoche will be reading these priceless texts to the gathering of monks for fifteen days or more.  The collection includes biographies of Tilopa, Naropa, Marpa and Milarepa, as well as instructions Gampopa gave to his closest students.  Most of the texts deal with the Six Yogas of Naropa, and there is also an empowerment and practices of Vajravārāhī, the central deity of the Karma Kagyu lineage.  Further, the collection contains many other instructions on sutra and tantra, instructions on Mahāmudrā, Gampopa's songs of realisation and instructions on the Stages of the Path (Lamrim).  The lung will include Gampopa's most well-known texts such as The Jewel Ornament of Liberation and The Precious Garland of the Supreme Path as well as some significant lesser-known texts such as Answers to the Questions of Dusum Khyenpa and the Sunlight of the Scriptures.

As a part of the Kagyu Winter Dharma Gathering, the oral transmission is incorporated into the carefully planned schedule of activities.  At 5:30 am, a wake-up call sounds and the time from 6:00 am to 7:00 am is reserved for memorising texts.  The lung starts at 8:00 am and lasts until noon, with a break from 9:30 am to 10:00 am.  The debate class is scheduled from 14:00 to 15:00, and from 15:00 to 18:00, there is a private study period.  Then, except for dinner time and a short tea break, the entire period from 18:00 to 22:30 is devoted to the debates. At times, these exciting debates continue deep into the night.

During such oral transmissions, the text is read aloud in its entirety by an authentic teacher who has received it in like manner – so continuing the unbroken lineage. 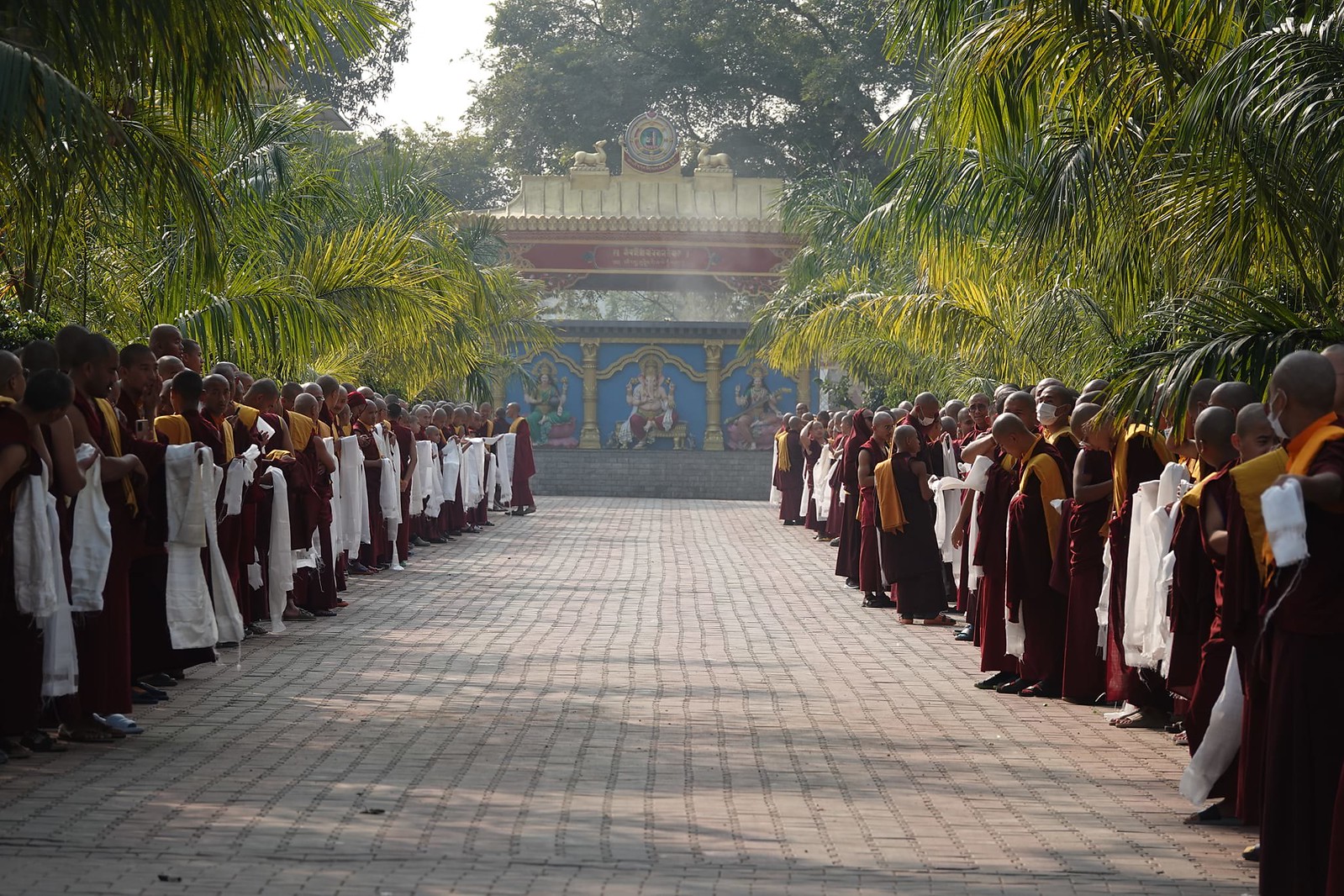