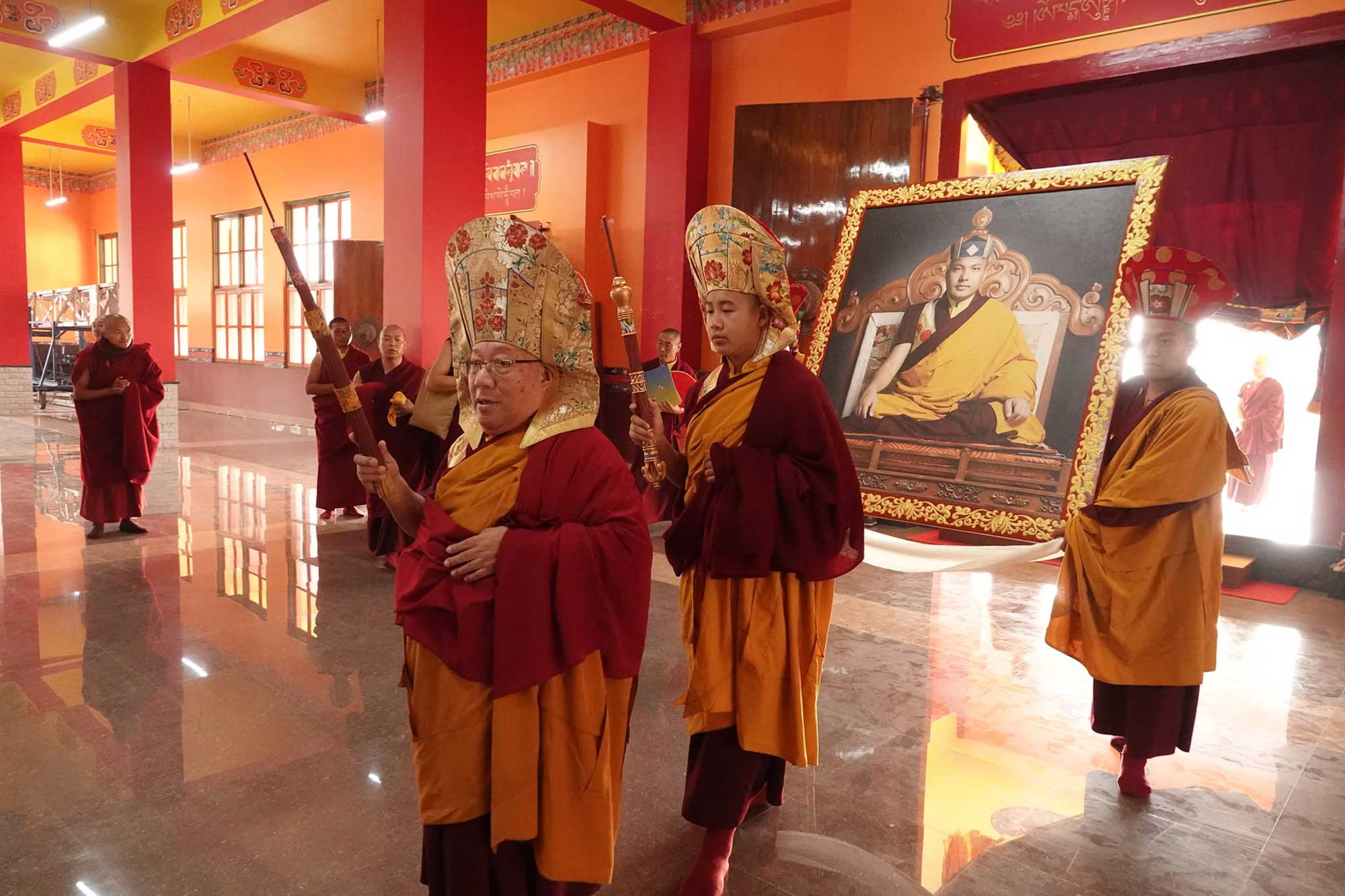 The Inauguration of the 23rd Kagyu Gunchoe

After a Covid-19 enforced hiatus, the Kagyu Gunchoe – the Winter Dharma Gathering for Monks – is able to unfold once again with renewed exuberance.  Located in West Bengal’s verdant countryside of forests and tea gardens teeming with birds, the stunning Bokar Shedra Öbar Chime Ling comes to life as Kagyu Gunchoe participants pour in from eleven of the Kagyu Monastic Colleges based in  Nepal, India and Bhutan.

Within the shedra's expansive gardens, lush with banyans, palm trees, flowers and sacred fig trees, on the banks of a dry, sandy river, groups of monks sit or stroll  immersed in discussion. In the Indian afternoon, alive with soft wind and the sweet scent of prajñā, one might feel as if transported to a great ancient monastic college such as Nālandā or Vikramaśīla.

The impression shifts slightly upon approaching the temple’s lively shrine hall where debating voices echo demonstratively. Even so, unlike the experience of the so-called “holy mess of the Seat of Awakening” in Bodhgaya, the atmosphere in Bokar Shedra is one of ease, clarity and focus.

One can’t escape a feeling of deep gratitude for such an extraordinary revival of ancient wisdom.

All the details for the Gunchoe were worked out collaboratively in a number of preparatory Zoom meetings between His Holiness and the shedra khenpos.

Then, in order for this great event to take place, the monks of Bokar Shedra have been working tirelessly so that the entire program flows seamlessly, like clockwork. Cooking, distributing meals in a spacious pavilion, accommodation in large buildings flanking the immense temple, debates and all other parts of life unfold with ease so that true wisdom may flourish.

The 23rd Kagyu Gunchoe began with an official procession led by Kyabje Bokar Rinpoche Yangsi, Khenchen Lodrö Donyö Rinpoche and the shedra khenpos. Central to the procession was the image of the Gyalwang Karmapa, After his portrait had been enthroned in the main shrine room, Bokar Rinpoche led the mandala offering, which was followed by celebratory sweet saffron rice and butter tea.

The Karmapa began by noting the reasons for the choice of venue: the availability of good facilities (as opposed to the tents in Bodhgaya) and the shedra’s location which makes it easily accessible from most other shedras. Then, the Karmapa made five profound points to be guided by:

From the moment we all go for refuge and enter the gate of Dharma, we have the responsibility to uphold the Buddhist teachings. The Karmapa quoted Dölpopa Sherab Gyeltsen:

“In all my lifetimes, may I shoulder the great burden of the teaching. Even if I cannot bear that, may I at least have the worry that the teachings might decline.”

Thus, we need to uphold, preserve and spread the teachings. That comes through teaching and practice which require us to have:

But upholding, preserving and spreading the Buddha’s teachings isn’t easy and the biggest problem is: We get too sectarian. We become too attached and too focused - too small, too limited in our understanding. So, we only think in terms of our own monastery, our own gurus, instead of thinking about Buddhism and the teacher of Buddhism. In order to overcome this, we need to study the texts of all schools while holding our own as primary – without getting attached to it. We sometimes talk about being rime or non-sectarian. Still, focusing on your own school remains the number one responsibility, mindful not to: “cut down the trunk while holding on to the branches.”

Though different Kagyu schools exist, they all originated in the teachings of Marpa, Milarepa and Gampopa, so there is a unity of thought central to all Kagyu schools. Although there are different explanations, fundamentally, it would be impossible for them to be different because they come from the same place. So, we need to make sure to study all the various texts that are praised by all Kagyu lineages. These texts used to be very rare but now a lot of them have been made available.

His Holiness encouraged the scholars to combine their efforts in the various shedras in order to create critical editions – initially the critical editions of the eight  great texts of sūtra and tantra (namely “Middle Way”, “Abhidharma”, “Vinaya”, “Prajñāpāramitā”, “Validity”, “Profound Inner Meaning”, “Hevajra Commentary in Two Books” and “Sublime Continuum”). Making reliable basic editions requires that we look at the different manuscripts, editions and source materials available not only in the Karma Kamtsang but in all Kagyu schools.

While there is nothing to be ashamed of with regard to our philosophical texts (they are a really good foundation), there is a lot of work to be done in creating critical editions, so the Karmapa encouraged everyone to develop some ‘Sem Shuk’ - determination.

The traditional stages of listening, contemplating and meditating are very important but now we live in a different era and this requires us to keep up with the times. Therefore, it is important to follow what is happening in contemporary research. Since there is a lot of work to be done in that regard, the Gyalwang Karmapa counselled everyone to take an interest in research and study the ways of contemporary academia.

He suggested that all the khenpos and ācāryas, who have a lot of time and often no particular job following graduation, should  spend some of their time doing research in order to bring together the traditional and the contemporary.

While the essential activity in the shedra is, of course, study, it is also very important to take care of your health. There are people who do a lot of studying, become very learned and so forth but they have poor health and that creates problems.

In previous Günchoes, competitive debates were always held between  teams  representing each of the different monasteries. However, this can actually lead to rivalry and partisanship so there is a  danger of it doing more harm than good. Conseqeuently, it was decided to adopt a different approach this year. Instead of competitors representing their own monasteries in debates, the teams will comprise monks drawn from different monasteries, mixed and grouped according to their levels and debating subjects.

In past years, the scoring was done by judges– scholars invited from the four main lineages of Tibetan Buddhism. On one hand, that was very good but on the other hand, scholars from other traditions do not necessarily know the Kagyu tradition and texts, and therefore it is difficult for them to follow Kagyu debating or assess whether the monks are getting the points right or not. So this year the debates will be judged by khenpos drawn from the different Kagyu shedras, who will be assigned to judge different topics according to their expertise.

His Holiness expressed his hopes for the Gunchoe to be fruitful and noted that at the conclusion, there would be a session for the students to share their opinions.

In these days of degenerate times, fewer people are becoming monastics to begin with, he said. For this reason, it is crucial for senior monks and khenpos to remain in their monasteries, take good care of the students and have good intentions in looking after them – often not an easy task as it would sometimes be necessary to give up some of their own hopes in order to do this.  However, the Karmapa urged the khenpos and senior monks to continue doing this.

A Summary of the 23rd Gunchoe Programme

The topics of the debates cover five fields:

For the junior students:

The newly-built Bokar Shedra became home to 350 monks in the year 2020 and it now hosting 1300 Kagyü Günchö participants from: 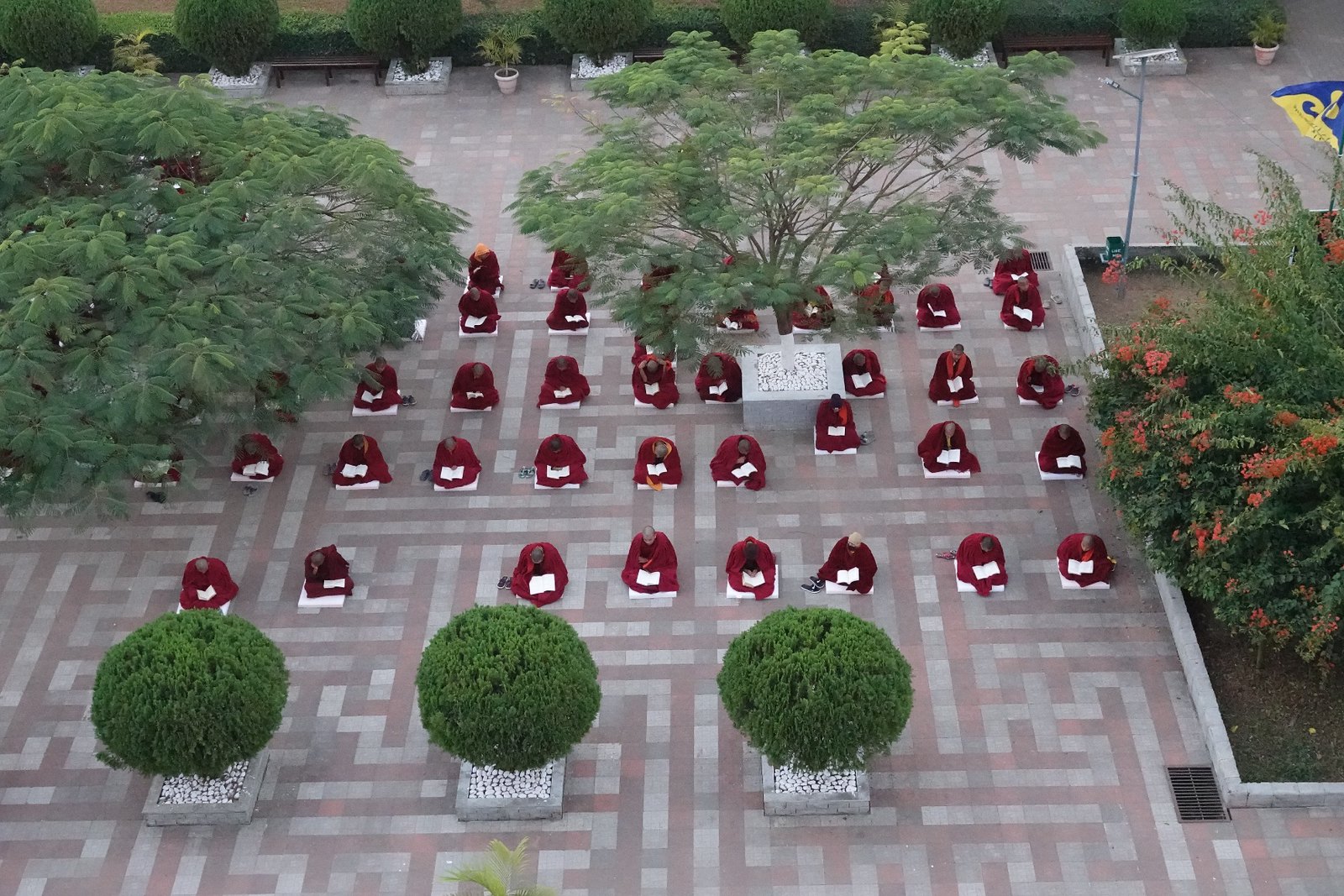